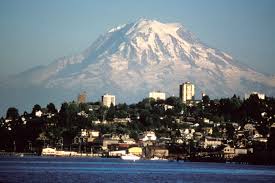 Growing up in Tacoma, Washington, we lived at the base of Mount Rainier.  Its 14,411 foot elevation as seen from sea level in Tacoma is a majestic sight.  Yet having grown up with that view every day, it quickly became simply an unnoticeable backdrop to the daily hustles and bustles of life.  It lost its majesty due to its familiarity.

Some 30 years later now when I return to visit my family, I join the rest of the passengers leaning over to one side of the plane to catch a view of the majestic mountain in all her glory.  I oooh and awww with the crowd as we all frantically snap pictures of her splendor.  When my wife and I get up every morning during our visit we will check for the mountain and take pictures every time we see a clear opportunity.

I have experienced this everywhere I have lived.  For two years, I woke up overlooking the Pacific Coast shoreline in Malibu and yet went to the beach only twice.  Soon the spectacular sunsets into the Pacific became ordinary and all too familiar.

Later we lived along the illustrious Rocky Mountains and once again found them blending into the backdrop becoming simply the directional finder of west in a large city.

By the time I was leaving New Jersey to move to Huntsville, I had learned my lesson about taking spectacular and special local sites for granted.  So we booked our family trip to New York City and took in the tourist spots before we left the Northeast.

I’m afraid this same problem afflicts us spiritually.  Many young people growing up in the church abandon it at their first opportunity because they didn’t appreciate what they had.  It’s not until years later, after experiencing the enticements of the world and coming back with all the scars to prove it (if they make it back intact at all) that they discover the beauty and majesty of God with fresh eyes.  It’s the curse of the familiar.  Too often, God’s amazing character, acts, and community simply become the ignored and unappreciated backdrop of our lives.

Our hope comes in the encouragement of scripture, “Train up a child in the way he should go; even when he is old he will not depart from it.” (Proverbs 22:6)

Let us repent of ignoring the familiar and take a fresh look through the eyes of gratitude.  Take a spiritual “staycation” and come to appreciate what you have in Christ before you start chasing the “greener grass” of other pastures.