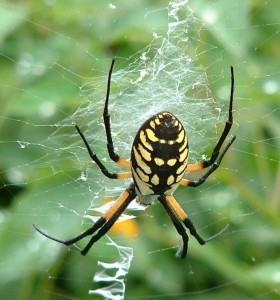 We met her at the beginning of the summer.  My sister-in-law called

her, “Natasha”.  I first met her in a crepe myrtle tree near our house, a beautiful black and yellow garden spider that had spun an intricate and beautiful web in our tree.  But when I went back again during my next weekend yard chores, she was gone.  At first I thought it would have been just a brief and passing encounter, but then a few days later as I was watering the flowers around the mailbox, I saw her again having formed another amazing web.  I was fascinated as I watched her simply wait unflinchingly for a guest to enter her web.

My first thought when I see bugs is to exterminate them, but she was very large and stunning in appearance.  She seemed in my perspective to have exceeded the size limit as an annoying insect into an animal, a creature of God’s beauty.  My wife and I agreed to leave her undisturbed and just watch her.

This fascination became a daily event.  Daily conversations about whether we had seen Natasha, what she was doing, and what she had caught and consumed in her web. We noticed her growing size, eventually her laying of eggs into a nest, and awaiting the birth of her next generation.  Natasha had become a family member, though I don’t think she ever knew of her adoption.

As my wife and I have pondered over Natasha, my greatest musings have been, I wonder how much I’m like Natasha.  As ignorant as she is about our interest in her, I wonder if that is how ignorant I am of God’s interest in me.  Am I here because God has chosen not to allow me to be exterminated?  Does God talk about me every day?  Has He named me like we named Natasha?  Does He watch with fascination over my daily adventures and smile at my fulfillment of His purpose expressed through me?

As Natasha’s web hangs empty today, she has filled me with a summer full of daily meditations that God cares for and is more interested in me than I could ever be of Natasha…and most of it without my realization.  For as the heavens are higher than the earth, so are God’s ways higher than my ways and His thoughts than my thoughts.  (Isaiah 55:9)

Natasha was a daily reminder of how much God cares for me in ways I will never know or realize.  Thankfully I’m part of a romance that will never end, an eternal romance.