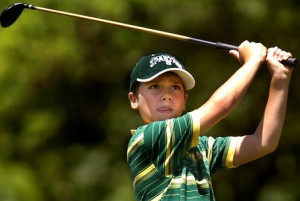 They say character is caught not taught.  And unfortunately youth sports have, over the years, displayed some pretty bad character by parents and coaches, who are more concerned about winning or living out their dreams vicariously through their children.  But today I offer you a vision of hope and it comes from the world of golf.

Recently, I had opportunity to attend our local sectional golf tournament.  It seems in golf, like no other sport, a little pressure can erode one’s confidence and performance quickly.  Young golfers, who dazzled spectators on the range and in preparation for this event were shooting their best scores of the year, find themselves crumbling under pressure.  Their coaches are at their wits end with players making decisions they never made all year, as if their golfers had been abducted and were replaced by seemingly alien novices.

As young men who were normally shooting scores in the high 70’s or low 80’s began turning in scores of 90’s and 100’s, there were a lot of deflated expectations.  And yet through the fog of unrealized dreams, there was one young golfer on the worst team in the section whose light was shining brightly.  As a mere 8th grader, he had been the last individual to qualify for the next round.  What a victory for such an unsung team!  What a triumph for such a young player!  What a future!

This young man’s father was not only the player’s golf coach, but a highly decorated professional golfer who had enjoyed an illustrious career on the biggest of golfing stages.  His son was now appearing to be taking his first steps toward golfing greatness.

However there was a question that arose about the score.  It appeared that his score card was inaccurate.  Not that the total was wrong, but that a score was recorded inaccurately on the card.  The coach (father) took the card to investigate.  After replaying shot by shot the entire round not only with his son, but also with his son’s score keeper, it was concluded that his son, in fact, had signed an inaccurate score card.

Having assisted on golf teams in the past and having parented my son through the ranks of junior golf, I can’t imagine the pain of having to turn in your son’s card declaring him disqualified and not able to continue to the next level of competition.

For a father who always wants the best for his son, this dad chose integrity, honesty, and character over winning and advancing.  Though the initial pain must have been great and the drive home long and quiet, I believe there is a son who will one day grow into a man of distinguished character because of a father who put character before winning.