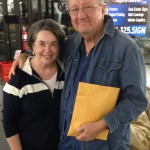 The stories we can tell about items we have found in our donation piles at The Saving Way thrift stores are limitless. The stuff we get runs the gamut from hilarious to disturbing and from goofy to gross. And yes, we often find loose change and occasionally a few dollars tucked into pockets of old clothes and purses. That loose change is added to the His Way scholarship fund.

Recently, one of our employees, Toshiko Wingard, discovered an envelope inside a neatly folded blanket that was donated to the store. She opened the envelope, which contained some old letters and…to her excitement, also a bunch of small bills adding up to over two thousand dollars! Larry Rice, our Operations Manager, has been at The Saving Way since day one, and was quick to point out, “Since we opened our first store five years ago, that is the most exciting thing we have ever found in a donation!”

Fortunately, there were enough clues in the envelope to allow us to track down the donor via the internet and social media. In fact, as it turned out, one of the donor’s family members is a mutual friend of mine on facebook. A few years ago, before the internet, it would have been nearly impossible for us to reunite the money with its owner.

The owners of the money were surprised and delighted to receive the news that we had discovered this treasure, and as it turned out, they didn’t even know the money existed. They are in the process of cleaning out their parents’ home, and thought they had checked through all of the items pretty thoroughly before bringing them to our store to donate.

To reward Toshiko’s honesty, the Puryear’s donated enough money to the store to pay for a pizza party for our entire staff. Upon meeting them, Toshiko simply offered her infectious smile and a simple, “It was the right thing to do.” Larry and I agree that our staff at The Saving Way is the best, and we are pleased with the honesty of our employees. It shows not only a heart for this mission, but also a heart to do what’s right all the time.