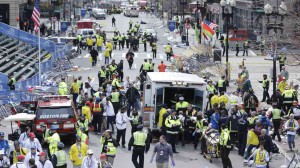 The FBI, National Guard, Terror Task Force, and the entire intelligence community are searching frantically and fiercely for the perpetrator of this ghastly bombing that has killed 3 and hospitalized 183.  America and the world is asking who did it.  Who is behind this crime?  Is it an international group like Al Qaeda or some other terror organization bent on hatred against our nation and way of life?  Or worse is it some home grown domestic terrorism from the likes of Timothy McVeigh or Eric Rudolph?

Surprisingly, none of these organizations have asked me who the source is and yet I recognize the pattern and evidence of this crime.  I see it every day in the lives of those devastated by his acts of terror; the shattered lives, the innocent victims, the dazed and confused looks, the panic and hysteria.  The cause is the thief.  “The thief comes ONLY to steal and kill and destroy.” (John 10:10)  And this attack on Monday did all of this.  It obviously killed three innocent people; a 29 year old woman, a Chinese exchange student, and a young 8 year old boy.  It destroyed countless lives, property, and a way of life.  And it stole our peace, our joy, our celebration on Patriots Day, and our future.  This can only be the work of the thief.

As we want to point fingers and place blame, let us remember that evil is at the root of all of this.  The organization is much broader than a terror cell and much more extreme than any religious fanatic.  And is has been terrorizing far longer than 9/11.  Since mankind’s inception in the Garden, Satan has been at work to destroy our relationship with God, each other, and even ourselves.  He is highly skilled and well trained.  Though his efforts are not new, they are pervasive, well developed, and systemic within us and our relations.  We are fallen and we live in an obviously very fallen world.

Paul warns us in Ephesians 6:11, 12 that we must, “Put on the full armor of God, that you may be able to stand against the schemes of the devil.  For we do not wrestle against flesh and blood, but against the rulers, against the authorities, against the cosmic powers over this present darkness, against the spiritual forces of evil in the heavenly places.”  The devil has well developed schemes, the greatest of which is to get us thinking that people or institutions or organizations are the source of the problem.  Our finger pointing at one another will continue to keep us battling against the wrong cause and not the true source.

What we face is a spiritual battle that only has a spiritual cure.  Jesus states this cure in the second half of John 10:10, “I came that they may have life and have it abundantly.” So, in the midst of our grief as we wait for news of the perpetrator let us not be distracted by the human blame game.  Let us begin an honest quest for life in Christ.  This is the only true answer to Satan’s reign of terror.  And the only true hope in Boston.