“I Wanted To Die” – The Fred Smith Story 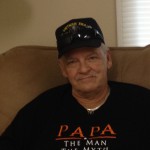 Ask Fred to tell you about his life up until now and he is pretty straight forward.  “I had a really rough childhood.  At age 15, I started drinking and smoking pot and that was the start of 43 years of mostly ‘hell on earth’. I died once that I’m sure of and was dead for 4 hours from a drug and alcohol overdose in 2009. I quit drinking then to save my marriage, but didn’t give up my drugs. I chose drugs over my family, well everything, and I saw no purpose for my life anymore”.

Fred’s life is a completely different story today, but it was a hard journey to this point. Fred knew God from a young age, and went to church off and on at different periods of his life, but says that he mostly just ignored the “little voice” he heard warning him as he made one bad choice after another. He joined the Navy at 17 and his drug and alcohol use escalated out of control. Fred was married and divorced four times, has seven children and twelve grandchildren. If you know Fred, you know his emotions are always very close to the surface, but this is particularly true when he speaks of his family. Over the years, his choices and broken promises led to complete separation from some of his children and grandchildren.

One night in 2010 while he was fishing, his fourth wife discovered him smoking a joint after he had promised that he had stopped. Tired of the drugs and lies at this point, she gave him an ultimatum: “You can have the drugs or you can have me”. Fred says through tears, “I said, ‘See ya later!’ That’s how deep in my addiction I was”.  After that experience, he lived mostly as a hermit for 3 years, smoking pot and popping pills, eating only once or twice a week and rarely showering. He tried to shoot himself several times, but the gun would never go off. “I wanted to die”, he says, “I had no purpose. All I was doing was causing pain”.

These years of hopelessness finally came to an end one day when he overdosed for the second time that month in May of 2013. During the time he was unconscious, he will tell you that God paid him a visit and showed him what hell was really like. “It was a dark, desolate and lonely place where there was no God, no love, no feelings, no happiness, no joy or hope!”  He saw himself laying on a concrete slab all alone, then he dissolved to dust and blew away. “It was so vivid and real to me, that when I woke up from that experience I did not believe anymore that there even was a God”.   But as the fog wore off during the ensuing time in the mental hospital and another rehab center, Fred says God “cleansed his heart” and he started to read his Bible and believe again. By the time he arrived at His Way, he was over 2 months sober and seeking a personal relationship with the Lord. “I didn’t come to His Way to get off drugs. I already knew I would never touch them again. I came to find a personal relationship with God, to seek his face”. He chose to read his bible and pray instead of spending his downtime watching TV or playing games and he says, “I found God’s face, grabbed hold of Him and wouldn’t turn loose until He blessed me. When He did, I claimed His promises”.

Early one morning, during his daily routine of reading his bible on the front porch, Fred says he surrendered his all to God and prayed; “Lord, You’re the potter and I’m the clay. Mold me and use me as you will”. At that moment, he received God’s Shalom, a peace like he had never known before. “People want to keep a little control for themselves, to be able to say they have some final control over things. You can’t do that. You can’t just give 99.99999% of your heart, will and trust! You have to give 100% of yourself, all your will, and trust to God! After that, just obey and continue seeking His will and claim the promises found in his word”.

Fred has since reconciled with his children and has a life full of Jesus and his family and friends, driving home nearly every other weekend to see them. He also is now on staff at His Way, calling it his “JOY” instead of a “JOB”. Having found this peace that passes all understanding, Fred wanted everyone around him to have it. But he soon discovered that he couldn’t give it to other people.  Only God does that when that 100% commitment is made. “It is so hard to see people hurting, stressing and worrying, knowing that they don’t have to experience those things”. So much so that Fred prayed to God to take away the peace, but he wouldn’t take it away. So Fred prayed to God for a better way to show and express it to people in a way that would cause them to be willing to make the 100% commitment it takes to get it for themselves.

Then in December 2014, Fred was diagnosed with Stage 4 adenacarcenoma lung cancer. This isn’t what he would have chosen for the next season of his life, but he knows the cancer has a purpose. Though he knows he doesn’t have to understand the purpose, he feels that it has opened up a door to share God’s peace with others. He does this by having a positive, peaceful and confident attitude in spite of a somber and, to most, a frightening prognosis. He started hearing from people via social media and in person how he was an inspiration to them, having this peace even looking at death soon, short of a miracle from God. Also he feels truly blessed by and through the fact that he has been able to bring laughter, smiles and hope to faces full of pain, fear and worry in the room at the cancer center where he and the other patients are receiving their chemotherapy. “It’s a dark place, and I get to bring the light of Jesus into it by sharing through testimony the power of God’s comfort and peace, showing gratitude to God even for my cancer, praising God, praying and cutting up with the nurses and other patients.  Through all these things I’ve realized that God has blessed me with this cancer in answer to my prayer for a better way to show and express His peace to others. What better way than to show Gods complete and perfect peace and even gratitude facing man’s number one fear ‘Death’!”

Though his future is uncertain, Fred is not bothered by anything the world can do to him. He says it is pretty ironic that for many years he wanted to die, but couldn’t.  And now that he has found a reason to live, a purpose, he is facing the reality that he may not have many years left. “When God’s purpose for me on this earth is done, he will call me home. And I’m ready”. Until then he will continue to share his story of hope and peace through Jesus to those in recovery and those afflicted with sickness.