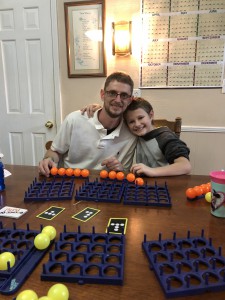 John’s lifestyle of alcohol and drug abuse began to get out of control shortly after his mother died as a direct result of alcoholism.  It was then that he says he began drinking, using drugs, and practicing the dishonesty that often goes along with them…to the point that it put a huge strain on all his relationships, including with his 2-year old son, Charlie.  Eventually John’s fiance left to try and force him to “wake up and get help”.  Instead, he says, the loneliness and hopelessness he felt seemed to increase his desire to cope by drinking and using drugs.  In fact, he says that he drank to the point of blacking out several nights per week.

He started missing work frequently and eventually lost his apartment.  He also was arrested several times for DUI and possession charges.  He was still visiting his son weekly until one night he was arrested in front of Charlie, under the influence of drugs and alcohol.  During the arrest, the police allowed him to hug his son goodbye for one last time, but they wouldn’t remove the handcuffs. John says that it broke his heart, hugging his young son while the handcuffs rubbed on his son’s back.   And after his release, Charlie’s mom no longer allowed him to see Charlie.

“I just fell deeper into addiction after that,” John says with sadness.  “And I started smoking and manufacturing meth”.  As his addiction continued to spiral out of control, he was eventually arrested on a manufacturing charge.  It was then, while waiting in jail, that a family member told him about “His Way” and he agreed to get the help he needed upon his release.  “When I got to His Way”, he says, “I had no relationship with God and no idea who I was anymore. But I knew I had to change if I ever wanted to see my son again and I didn’t want his last hug from me to be with handcuffs”.

While at His Way, the desire for a reunion with Charlie weighed heavily on John’s mind.  John remembers a conversation with director Tom Reynolds where he described missing his son and his regret for having missed over a year of Charlie’s life.  He expressed his strong desire to see him again.  John says that Tom’s response was simple , “We’ll pray about it”.  At first, being told to “pray about it” made John angry, but he agreed and began praying every morning during the devotional time about the restoration of his relationship with Charlie.

Charlie’s mom asked John to sign over his parental rights. Not being able to afford a lawyer, John felt like his hands were tied.  Again, he sought counsel from Tom and was advised to respect their wishes and stop trying to contact them, but instead to pray for them and have patience. John says, “I didn’t want to pray for them.  I wanted to see Charlie immediately!” But, hesitantly, he continued to pray for them.  “I felt that all I had left was prayer”.

John eventually transitioned out of His Way and then relapsed, which led him back to His Way for a second time.  Still praying for Charlie and his caregivers, he began studying the Bible more earnestly and felt the conviction to be baptized.  John says, “After being baptized, I felt a sense of peace that I can’t describe.  I continued praying for them, but I started adding that the Lord’s will would be done and asked God to bless Charlie and keep him healthy and happy”.

On January 1, 2018, John received word that Charlie’s mom wanted to begin reuniting him with his now 10 year old son.  John began to tell everyone he saw excitedly –  “God finally answered my prayers!”  He began speaking to Charlie every day and he apologized for his actions. A few days later, he got to see, hug and spend the afternoon with Charlie for the first time in almost 8 years, and will get to see Charlie every Sunday as they begin to re-develop a relationship and get to know each other again.

John finishes his story by saying, “God is Good!  And looking back, I thought God wasn’t listening to me, but I realize now God wasn’t ignoring me, I just wasn’t living for Him. It wasn’t the time for Him to answer my prayer.  I was putting a lot of things above God including my relationships.  It wasn’t until I started putting God first that he saw fit to answer my prayer.  Now my prayer is that he will help me be the man and father he wants me to be”.