At His Way, we welcome any man who is committed to overcoming 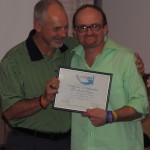 addiction, but we were not sure about Mike.  Mike’s professional diagnosis coming out of jail made him well beyond our capabilities.  He had spent the majority of his adult life incarcerated. He had been labeled with some extreme psychological dysfunctions. He had deeply embedded grief issues that appeared to remain unaddressed. And, numerous social and relational difficulties.  Through much prayer and the unwavering faith of believing that God can do far more than we can ask or imagine, we agreed for Mike to come.

Upon Mike’s arrival, we quickly realized that his issues far exceeded our capabilities and training, but we were thankful that he had the support of the mental health community as well.  His grief issues were deep.  He had lost his mother and his son in two separate tragic car accidents, both while he was incarcerated.

Mike, also, had had a traumatic childhood.  At twelve, he was seriously injured when he was hit by a car while riding his bicycle.  Three times he was declared dead while doctors worked to save his life.  He recovered from that accident, but was never quite the same again.  The trauma had changed him.  He also grew up as an only boy in a home without the influence of a father.  So by the time he arrived at His Way, it was evident that he craved positive male attention.

Though Mike was extremely intelligent, he lacked the ability to succeed in a traditional classroom environment and chose to drop out of school at a young age.  Over the years, he had made vain attempts to complete his education with a GED, but was never able to stick to the process long enough.  Typically, frustration and self-doubt would force him to quit.

Over his time in and out of institutions, he had never stayed long enough to get help.  He would eventually feel uncomfortable for some reason and run.

But at His Way, Mike found the loving fellowship of Christian brothers that helped him grow.  The unconditional acceptance he found helped him work through many of his social and relational difficulties.  He was able to openly address and work through his grief issues as he told and retold the stories of tragedy in his life.  Some days Mike would be found sitting alone watching and re-watching the DVD of his son’s memorial that was played at his funeral.  He would invite us to watch with him as he would reflect over those special times.

Early in his stay, he would face difficult issues and would contemplate running.  But his brothers would stop him and persuade him once again to stay.  There were numerous staff discussions warning us of Mike as a flight risk.

Through much cajoling, Mike was encouraged to begin GED classes in order to complete his high school education.  Mike was extremely hesitant.  He had tried it a number of times before without ever completing it.  While he has yet to finish, he has a passion and resolve to see it through this time.  He has enjoyed the assistance of many coaches, tutors, and encouragers among his brothers at His Way.  He is well on his way to reaching this success.

He is also dedicated to a job that he loves and that loves him.  I hear constant praise for his strong work ethic and commitment to a quality job at The Saving Way Thrift Store.

All of his attention getting habits and idiosyncrasies have been met with loving understanding, support, and care.

Above all, Mike has grown in his passion for Jesus and his truths about who he is in Christ, truths that he has actually experienced through the fellowship of the staff and residents of His Way.

Mike graduated His Way after six-months on November 6.  He has moved into a house of Christian fellowship while continuing in the job he loves and is nearing completion of his GED.

Though Mike’s diagnosed issues were well beyond the scope of the professional experience of the staff and residents of His Way, they were not beyond the unconditional love of God expressed through the fellowship of His people.

Mike was also humble enough to be willing to accept the help and support of others.  He accepted their vision for his life and confidence in his abilities even when he didn’t see it and self-doubt could have quickly overwhelmed him.

Peter encourages Jesus’ followers to “love one another earnestly from a pure heart” (I Peter 1:22) because “love covers a multitude of sins” (I Peter 4:8).  Unquestionably, God’s love has overcome Mike’s history of sin, his personal idiosyncrasies, and the tragic sins that were committed against him in his past.  As we celebrated Mike’s graduation accomplishment from His Way, I could not help but reflect on the chorus from the classic Christian hymn, “when nothing else could help, Love Lifted Me!”

Mike’s transformation was brought by the power of God’s love and his acceptance of it.  And so can all of ours!  May God’s love lift you as it has Mike.