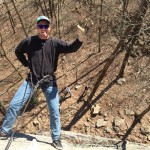 Matt’s story has a familiar beginning. He’s from a good family and grew up going to church. While he was a good student and played sports all through high school, his drug use started when he was only 13 years old, trying marijuana and alcohol with friends. It escalated from there.

After high school, Matt went to Auburn for two years and says, “I became a drug dealer at Auburn. I mostly sold marijuana, but eventually pills and cocaine too.” He also developed a serious addiction to pills after being prescribed a narcotic painkiller called Roxycodone after surgery. When the doctors quit prescribing them, he started buying them on the street. It didn’t take long before Matt was using drugs intravenously.

Realizing he had a problem, he moved back to Huntsville to live with his family and change his lifestyle, but was soon using heroin. “I did the junkie thing for a year and overdosed twice.” Matt went to a rehab center for a while (and was even baptized while he was there), but eventually made bad choices and was dismissed from that program. Back at his parents’ house, he overdosed 3 more times, one time not breathing for 15 minutes. Matt’s parents gave him 2 choices – move out of their house or go to His Way.

Now –  2 months away from his one-year graduation, Matt is part of the His Way Advanced Recovery Group (ARG) program, and providing leadership for the other residents. He says his life is completely different. “I always believed in God and knew about God, but I never acted on it. This time, I am trying to walk it out. The approach at His Way has been to show me that I need to let God change my whole life.” Instead of focusing on not doing drugs, Matt credits His Way with helping him change his friends, his surroundings, and his attitude. He has found a new life where he doesn’t want to do drugs anymore.

After graduation, Matt plans to move back in with his parents for 2 months and then go to scuba diving school in Louisiana, with the goal of becoming an underwater welder. He plans to stay in touch with the close friends he’s made at His Way, but is looking forward to an exciting new career and a fresh start in a new city.

When asked what he would like others to know about His Way, Matt says – “His Way can help anybody that is ready to change their life. But you have to be ready. I am very appreciative of everything His Way has done for me. I only had death or prison ahead of me. So, I truly feel like His Way saved my life.“