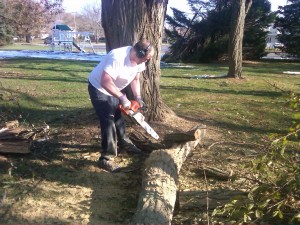 Marshall, one of the residents at The Way, was a true inspiration to those he served during our trip to New Jersey to help with the Hurricane Sandy relief efforts. He was always found in the center of the work despite his health challenges. A few years ago, Marshall had been shot and was not expected to even live. He amazingly came through, but was told he wouldn’t walk again due to the bullet that was still lodged in his spine.Yet, again overcoming the odds, he regained his ability to walk, but faced tremendous pain and swelling in his legs. He eventually had his right leg amputated at the knee.

Even with a prosthetic limb, Marshall led the way as we worked in New Jersey. You could usually find him in the middle of the debris piles with a chainsaw clearing the rubble. God’s amazing miracle was to take a man who expected to be dependent on others for his every action, and use him to serve those in desperate need.

God can be glorified through all of us.