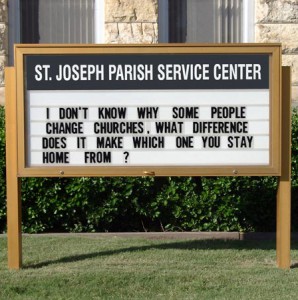 Recently, I missed our Sunday morning assembly due to being sick.  I cannot remember the last time I missed an assembly due to illness.  While I was not feeling well, I still did my personal study during the congregational bible study time and then tried to decide what I would do next.

I turned on the television and began channel surfing through various religious programs.  I settled on a few for five or so minutes until I remembered that my own church live streams their service online.  So I logged in and began to watch.  As the service concluded, I realized that I could not spiritually survive on a regular dose of online or TV church.  To me that would be like trying to satisfy my hunger by watching the Cooking Channel.

That Sunday experience reminded me that Christianity is a participant and not a spectator sport.  Biblically, the only people in the stands watching Christianity are those not of the faith.  We are to live in such a way before an unbelieving world that as they watch, they are convinced.  But Christians are never called to spectate their faith only participate in it.

That being said, maybe our conversations after an assembly should have little to do with the performance of the assembly or class (like, how the music was or how the preacher did), but instead we should discuss how my singing was and what I heard in the message, learned, and will begin to apply this week.

Let us all get out of the stands and begin living our faith and not just try to watch and critique other’s religious performance.