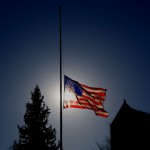 The peace, quiet, and harmony in Charleston, SC after the tragic racially motivated murder of nine African-American Bible study attendees at Emanuel AME church on June 17, 2015 by a white supremist  youth stands in stark contrast to the almost year-long protesting, rioting, and violence following the killing of one African-American youth in Ferguson by a police officer.

What creates such a difference?  The difference is created by the decision of the Christian community in Charleston to forgive the perpetrator.  Two days after this senseless crime, the daughter of 70 year old victim, Ethel Lance, said to Dylann Root, “I will never talk with her again.  I will never be able to hold her again.  But I forgive you!”

AME Bishop John Bryant stated at the memorial service, “Someone should’ve told the young man.  He wanted to start a race war, but he came to the wrong place.”

This reveals the power of Christians who choose to obediently walk in the footsteps of Jesus.  Jesus taught and practiced a non-violent response to violent, sinful, and even abusive behavior.  He taught ideals such as turn the other cheek and going the extra mile.  And followers such as Paul emphasized to “Bless those who persecute you; bless and do not curse them. . … Beloved, never avenge yourselves, but leave it to the wrath of God, for it is written, “Vengeance is mine.  I will repay, says the Lord.”  To the contrary, “if your enemy is hungry, feed him; if he is thirsty, give him something to drink; for by so doing you will heap burning coals on his head. Do not be overcome by evil, but overcome evil with good.” (Romans 12:14, 19-21)

In I Peter 2:21, Jesus’ lead apostle recounted, ”For to this you have been called, because Christ also suffered for you, leaving you an example, so that you might follow in His steps.”  The path of Christian discipleship is a choice of willfully enduring suffering as Christ did.  This isn’t just a good suggestion; it is a calling of Christ.  It is the calling of God!  Peter goes on to explain that in the midst of Jesus’ greatest anguish and suffering on the cross, He did not retaliate or revile, but instead graciously bore the abuse because,  He entrusted “Himself to Him who judges justly.”  The Christian faith calls us to non-retaliatory entrustment of violence, wrong, and suffering to a God who judges justly and will manage the fairness issue while we manage the obedient, love and grace issue of forgiveness.

As Reverend Nelson Rivers of Charity Missionary Baptist church in North Charleston stated, “You cannot be the thing you hate.  You cannot become the evil you seek to eradicate.  Forgiveness is not the same as ignoring the facts.  We want justice.”  But Christians entrust justice to God and do not take it into their own hands as some self-righteous vigilantism.

The fact is Jesus bore our sin in His body, so that we may be healed. (I Peter 2:24)  And, we as His followers must bear the sins of the world and carry them to Jesus that healing may come here as well.  In the context of restoring sinful people, Paul writes, “Bear one another’s burdens, and so fulfill the law of Christ.” (Galatians 6:2)  The burdens we must bear in fulfilling Christ’s law of love is the consequences of the sins of others.  And the only way we as frail, weak people can bear those sins is through the forgiveness of Christ.

Jesus prayed from the cross as He was being brutalized in every conceivable way.  He prayed for those who were abusing Him as they were actually abusing Him, stating, “Father, forgive them for they know not what they do.”

As followers of Jesus, we must pray the same whether in the face of great social harm or even personal slights.  It is Jesus’ path of peace.