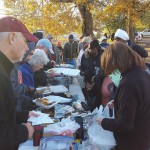 I am with those living in the shelter of a rescue mission, feeding those who are homeless, and ministering to men in a recovery center.  None are situations that we dream of spending our Christmas in.  So how do these experience the expectations of Christmas?

Actually, I am not sure their experience is not much closer to the original Christmas experience.  As a young virgin girl is preparing to give birth among her family in her little hometown of Nazareth, she and her husband hear that the emperor is requiring that all register for his empire’s census in their town of origin, which in their case means traveling to Bethlehem some 90 miles south.  I can’t imagine the fear and disappointment as this young couple takes on this week long trek journeying over treacherous mountain terrain away from all that is familiar.  At a time when all that is familiar would be all that mattered.

They arrive in the strange town of Bethlehem only to discover that there is no place to stay.  So homeless and broke they persuade a man to let them stay in his stable.  I am sure their hope is to register quickly and get back to Nazareth, so that Mary can have her firstborn child among her family.  But instead, she goes into labor that night in the barn.  In a strange city, her only support is her husband having to coach her through this painful ordeal.  So among the filth and stench of a stable full of barnyard animals, Mary gives birth to her firstborn son.  I am certain, not quite the way she imagined the event.

After the birth, their first guests are not family to see their first grandson, or dignitaries to see the King of the Jews, or medical professionals to lend assistance, or synagogue officials to celebrate the Messiah, but shepherds; lowly, dirty, roughneck, weather beaten shepherds.  I am sure their arrival did not improve the smells of the stable environment.  I imagine their calloused, dirty hands were not the first a young mother wanted touching her newborn as he lay asleep in a feeding trough.

The amazing thing about this whole story, as scripture reveals, is that it is exactly as God had orchestrated it!  It was God’s idea to move Mary and Joseph to Bethlehem through the instigation of a Roman census, so that Jesus could fulfill the prophesy of His birth being in the city of David. (Micah 5:2)  It was God’s plan for there not to be a reservation or place for them in Bethlehem, so that His son would be born in humility and obscurity.  God sent the angels to tell, not the city council or mayor or the religious elite, but shepherds.  These social outcasts would be the first to announce the birth of God’s glory.

Because Christmas is about humility – not the glitter of Christmas cards or the warmth of a Hallmark moment or the pleasantries of a holiday hymn or the generosity of a jolly old elf, but the reality that God left the Most High to arrive at the least low so that He could save everyone in between.

So as I stand among all those who are trying to find meaning in a Christmas this year that is far below their expectations, I come to Paul’s encouragement in Philippians,

“Have this mind among yourselves, which is yours in Christ Jesus, who, though He was in the form of God, did not count equality with God a thing to be grasped, but made himself nothing, taking the form of a servant, being born in the likeness of men.  And being found in human form, He humbled Himself by becoming obedient to the point of death, even death on a cross.” (2:5-8)

And I realize that this year in the homeless shelter or in the rehab, we need not resolve the humility with Christmas glitter and expensive gifts because we may be far closer to God’s  original Christmas than any expectations we had in the past.  Let us not solve our humility but embrace it.

Let us humble ourselves this season that we may find the true meaning of Christmas.