You Are A Son Of God! 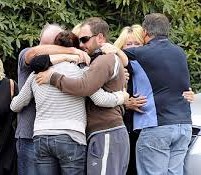 I have never seen this spirit more maturely lived out than at a resident’s recent five-month family meeting. As part of our program at His Way, we facilitate family meetings for each of our residents. Due to the ravages of multiple divorces, as well as years of family discord, this particular family was fractured.  So when it came to the five-month meeting, as our resident was nearing his time to graduate from His Way, there was tension among  all the participants.  Though they were all extremely supportive of the resident, they were not so supportive of one another.  A meeting with “one family” became divided into three separate meetings because one part of the family would not even interact with another part. It became clear that if the resident was going to reenter the family successfully after graduation, the family was going to have to attempt to heal the divisions. So, the resident insisted upon family reconciliation, and the divisions within the family agreed to meet together again to address these issues in order to fully support their son in recovery.

The meeting began with some polite courtesy, but quickly devolved into an argument about who did what when…and how that made them feel.  Accusations began flying. Tensions began rising. Fingers began pointing. Voices began elevating, and almost led to family members storming out, but the son of the family, the resident of His Way, began taking charge and calling the family to order.  He began taking control of the situation and calling out attitudes, addressing decade long resentments, demanding honest admission, requesting expressions of forgiveness, and expecting reconciliation.  By the end of our tension filled session, a drug addict who had always been the center of the family problem was now expressing his personal reconciliation through Christ…and bringing healing to a generation of family hurts.  As the session came to a close, the family was gathered arm in arm in a circle. And the resident, their son and grandson, led them in prayer.

After he finished, hugs were shared,  tears shed and healing was being experienced.  Plans were even made in order to keep the unity advancing.  I declared before the entire group that our resident, their son was truly a “son of God” because he had now expressed and accomplished the very purpose of Jesus, to heal broken people and mend fractured relationships.

I was blessed to witness the Kingdom of God come as every beatitude was expressed toward the ultimate goal of peacemaking.  “Blessed are the peacemakers, for they shall be called sons of God.”  (Matthew 5:9)  God had transformed an addict into a son of God!  Now that’s God’s kingdom at work.